Vasa Mihich has somehow always eluded me as to his proper place in the spectrum of California Art.  I think that because he is Yugoslavian this fact made it difficult for me to include him with the other post-war artists working in California.

In this sale, however, there is a piece that immediately made it clear to me that Vasa is indeed one of the great American sculptors of our time.  Not only was he included in the landmark show at LACMA in 1967, titled “American Sculpture of the 60s”, but he also exhibited painted sculptures at the Feigen-Palmer Gallery in the same period.  In fact, the first work that Vasa ever sold is being offered in our auction (Lot 143, estimated at $6,000-8,000) and was exhibited in this gallery in 1965.  “Crimson, Yellow and Green” is a dynamic and colorful tower with thin vertical stripes accentuating the height and a sloping pyramidal base that tends to reinforce its monumentality.

When I first observed this sculpture it reminded me of the painted towers and leaning planks by John McCracken and even resembles the simple yet powerful compositions of John McLaughlin.

It was at that moment that I realized that Vasa was carving a niche for himself using the vocabulary of the ‘California Hard Edge’ painters.  Now when I see his tall luminous sculptures in acrylic, for which he is more commonly known, it is easier for me to associate him with this group.

Lot #145 really is a California Hard Edge painting in acrylic! 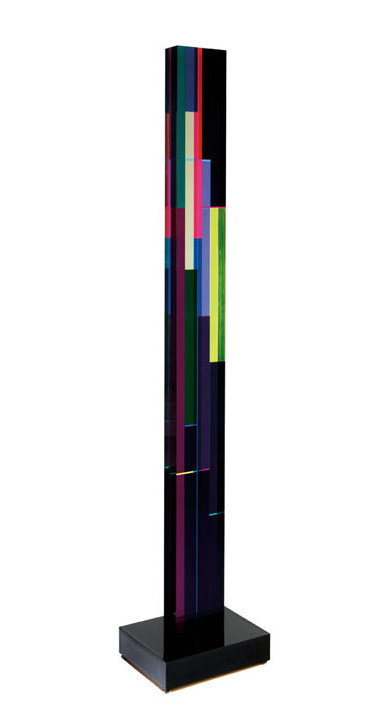